We each brought three favorite things to book club on Monday. And the winners are...

Ann Taylor Camisoles - they can be washed and dried

Mac Cover up pot for blemishes tube for under-eye

Air Guitar Nation - A Documentary about an air guitar competition

www.mindcandyclothing.com - rhinestone tees for smart girls (this one wasn't from me!)

Hayao Miyazaki films for kids especially My Neighbor Totoro and Kiki's Delivery Service for very young kids. Howl's Moving Castle and Spirited Away are also very good, a bit darker, though I let my kids (5 and 8 watch them)

www.parentingperspectives.com - This one is from it is a parenting class I'm taking. I'll blog more about this at a later date. The book that goes along with it is Redirecting Children's Behavior by Kathryn J. Kvols.

Banana Republic Tanks - they are long and don't stretch out

www.uptoten.com - a site for kids. Lots of cool free stuff, no need to go for the premium package

The Price of Privilege - a book about raising kids in a materialistic world. 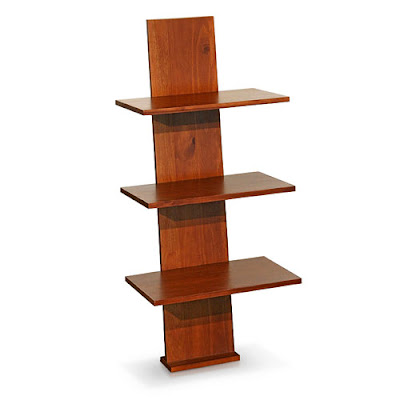 From my Very Short List subscription came this quiz with their clever title that I have purloined above. The goal is to see if you can spot the furniture of Donald Judd a famous minimalist sculptor from ordinary furniture that is put together with an allen wrench.

I scored a 100%. Though, I don't think it is because of my great eye for art, but rather recognizing some of the pieces from my own big box shopping excursions. 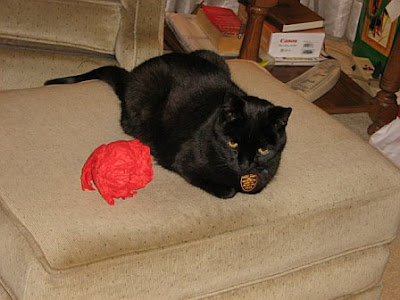 I found Abby when I was in college. She seemed to pick me, constantly coming to my apartment. When I went home for Thanksgiving that year I was afraid that no one would be around to take care of her, so I brought her to my dad. It was love at first site and from that moment on she was my Dad's cat.

He and Judy took such good care of that cat. She was spoiled like a favorite grandchild.

I'm going to miss hearing my Dad's exasperated lamentations about Abby jumping on to his lap every time I got on the phone with him.

We will all miss you Abby!

End of an Era 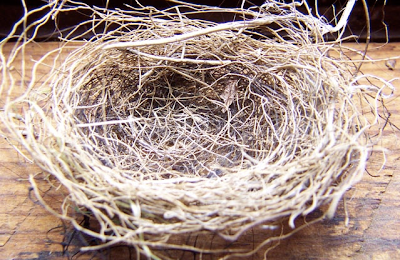 I'm supposed to be distraught, but I'm not. The Preschool Era is officially over. Or nearly so.

I filled out the paperwork for my youngest to go to Kindergarten next fall. Isn't that supposed to make me weep salty tears over the loss of my baby?

Seriously, I just can't work up any hysteria about this. I have enjoyed my kids at all of their different ages and stages (although, in retrospect, I must say, I'm really not a baby person. Except for other people's babies. Why is it that other people's babies are so irresistable? Is it the lack of sleep deprivation?)

I Want My McMoney Back, McItunes

Is it just me, or did Grey's Anatomy get really McBoring in the third season?

And if so, why do I keep watching one or two downloaded episodes per night?

If you don't know, Loving Frank is the fictionalized account of the love affair between Frank Lloyd Wright and one of his clients, Mamah Cheney. They left their spouses and children (him 6 and her 2). The book is a little Sex in the City circa Carrie moves to Paris meets The Feminine Mystique crossed with The Fountainhead. Some of the theories on feminism and individuality are interesting, but the books gets tedious with the hand wringing over her children and nothing really happening from a standpoint of the story moving forward.

I'm reading this for my book club so I'm sure they'll be a debate on her leaving her kids, and feminism (Cheney was a suffragist), but the really shocking part is that a servant of Mr. Wright and Ms. Cheney set fire to their Wisconsin home and attacked and with an ax killed Ms. Cheney and her two children who were visiting her for the summer. Four others were also murdered and two wounded. Mr. Wright was in Chicago at the time.

Holy Sh*t! How could I have not know this? Did you know?

News to Make the Slacker Mom in Me Smile

I have a confession to make. I don't bathe my kids everyday. Sometimes not even every other day. I won't go any further than that. I don't want to embarrass myself - or gross anyone out. But, I feel vindicated. According to this article a group that showered only once a week had lower instances of viral infections and skin infections compared to the control group that did their regular showering routine. Interestingly, it also gave the statistic that at the start of the study 47% of the once-a-weekers were single and at the end of the study 84% were. Given that my kids are 7 and 5 I think I'll stick with my schedule and feel good about it. 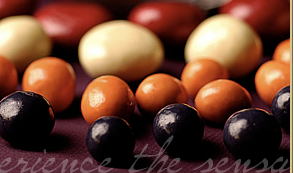 Oh, thank God! We can all rest a little easier knowing that the last of the Dilettante chocolate covered fruits is gone. 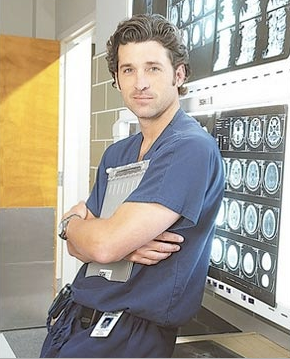 I try to keep a hand in. Y'know, like by reading enough in the newspaper about the hot TV shows so that I can at least converse about them at cocktail parties. But actually watch them? Heavens, no. That would be so...

Well, so...addictive for one thing. That's what happened when I finally watched the first season of Grey's Anatomy.

It started innocently enough. I downloaded a couple of episodes to my Mac for my long haul trip to New Zealand over Thanksgiving. Pretty soon, I was watching a show every couple of nights. Within a few weeks, I had burned through the entire nine shows.

Last night, I was left hanging with Meredith having been brought face to face with McDreamy's mysterious wife. I had to have more. I got in my car and cruised down to the shady highrise where my dealer lives (at least figuratively speaking) and downloaded the next 34 episodes overnight from iTunes.

Now, I'm thinking about starting to use during the day. I might need an intervention.

That's the Last Time I Spill the Beans

...on our blog, at least. For a week, I haven't been able to open our page, for fear that **someone** would see my last post about a certain Northerly, Crimson-wearing Hirsute Gentleman and the vulcanized simian error correction devices He will be bringing in several days.


Ahhh, yesssss, I really need to stretch this out...


Um, so...cooking a Crown Pork Roast for Christmas. And you? Never done it before, not sure why doing it this year. Could be masochism plain and simple.


Okay, I think that about does it. My blog is safe for prying small eyes once again.

Not that this means I'll be posting any more often.


I have a Crown Pork Roast to prepare.

I just love tossing that off lightly, can't you tell?


Did I mention, I'm cooking a Crown-- 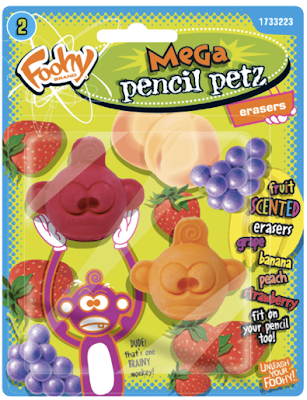 How much do I love my daughter? Well, last week I drove 30 miles to Walmart to buy mega Foohys , because it's the only thing she wants from Santa. And then, of course, I loved her so much that I had to buy out all five sets of them. I'm not obsessed with these impossible-to-find little critters after days of scouring the internet, eBay, and even calling the company that makes them. Let's just say that I was trying to ensure I never have to drive 60 miles for a 96 cent eraser at Walmart again.

And if that wasn't enough, today I paid $12.99 for a handwritten letter from a Santa telling her all about how the elves were working away on her Foohys. I really think it's going to work, even in the face of major doubting this year...I'm hoping the clincher will be my personally written p.s. message blathering on about how her parents are too old to believe and that it's not their fault and don't show them this letter etc etc. I can't wait to see how she takes it.

It's My FrankenMac and I Love It 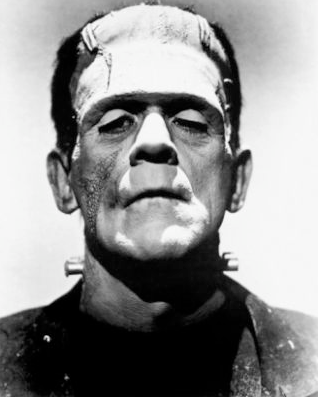 It's been an autumn of loss and mourning...and, man, does Boris Karloff have on a lot of eyeliner in that picture!

Sorry, I got sidetracked there for a minute. As I was saying, my two PCs pretty much gave up the ghost, and I finally decided that it would be much more cost effective, not to mention time-efficient to just get a new computer instead of sitting around filing my nails while waiting for multiple reboots each day, not to mention surfing the web at molasses speed.

When I visited my friendly CompUSA store, however, they informed me that I would be forcibly converted to Windows Vista if I upgraded my hardware.

My solution? So pretty, so shiny. The screen: so wide! It's a bird, it's a plane, it's a MacBook Pro running XP.

Believe it or not, I haven't even spent five minutes on the Mac side of things with that computer. It sits on my desk like a big brother to my friendly little white MacBook. Two tastes that taste great together. And now I'm back to getting things done at the speed of light. Hurrah! Not that you can count on me being any more diligent with the blogging...especially since I just found out that we'll probably be hosting the extended in-law family (all thirty umpteen billion of them) for Christmas. 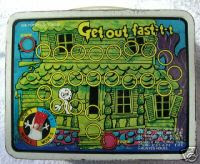 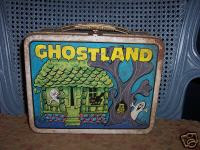 I went to an antique store today to do some holiday shopping and found the lunch box I had when I was in second grade. At first I thought it was a really cool find, then I thought. Hey, wait a cotton-picking second there.

I haven't blogged in quite a while and now I feel like I have to play catch up. I don't know why, but I've had a few blogworthy events or ancedotes and because I didn't get around to blogging them, I feel like I'm behind and that my next blog has to be really good. This happens to me with other things too. Like I'll owe someone an email for so long that I feel like I can't just dash off a two line missive, that it has to be a really long two page saga.

or, I should have sent someone a card, but I forgot and now I feel like I owe a super good card, plus letter, plus present...and so nothing gets sent.

so I'm not going to stress myself out about this anymore, no picture, no links, not even a cursory spell check. Just a quick list of what I wanted to blog and haven't:

-saw The Bee Movie - really liked it. Title of blog that never was - Jerry is back with a capital B!

-My husband started Atkins and bought some really nasty canned beef from Costco which included a recipe for Beef Strongonoff with first direction being open can of meat. need i really say more? Plus my Mac died...Plus I saw No Country for Old Men (excellent) - Title of Blog that never was - Movie, Mac, and Meat

-I accidently bought 14 pounds of Walnuts from a buying club. A fellow member asked if I wanted to split some walnuts. I felt bad because I don't contribute much to making the minimum, so I said yes thinking I would get maybe 5 pounds or so and now there is no room in my freezer. I'm trying to make Walnut butter today. Title of Blog that never was - Nuts!

And finally I went from blonde yesterday to a chestnut brown. I really like it, but I hate now revealing it to everyone. I feel slightly embarassed. Not sure why.

We're two friends who stopped trying to medal in the sport of competition-level mothering. Instead, we channeled our energies into writing a novel about Perfect Moms turned to crime...partly for therapy, and partly in hopes of actually getting it published.

Come to Zeno's Bar & Grill to escape the "Shoulds" of motherhood. The only rule is No Perfect Mom Snark!